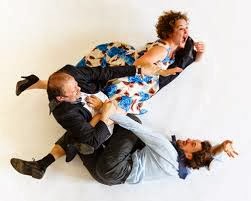 A company of actors of long-standing association are putting on a show about conflict. But two of the four haven’t arrived in time for curtain-up, so Swanny (Derek Frood) and the musical director, Fret (Thomas Johnson), launch into an amusing, hammed-up story about a man setting sail in his tin bath. When the errant pair, Duggan (Jordan Whyte) and Spurge (Michael Wagg), finally enter stage left, already in full-on bicker mode, the scene is set for an hour or so of name-calling, fist-flinging, muck-raking absurdity that claims (so says the website) to ‘dig deep into the human compulsion to argue the toss’ but which comes across as a rather slight, shambolic sketch show that sits somewhere between a Saturday morning kids’ TV programme and a student revue. By the end of it, I was longing for the reappearance of the tin-bath sailor…

Although Theatre Alibi are justifiably renowned for their immersive, inventive productions for younger audiences, Hammer & Tongs is not one of these – the language is too saucily child-unfriendly for that – but neither does it seem quite committed to exploring any adult themes to a satisfactory depth. Admittedly, there seems to be an intention to make a mockery of arguing, since the only way to cope with the ‘maddening, saddening, exhausting’ nature of it is to laugh in its face, but the execution is such that it’s unclear who these characters are and why we should care about their grievances at all.

Interwoven with scenes of the company bickering and sniping ‘backstage’ are episodes playing out examples of conflict – two children fight over what to watch on TV, their parents then argue about the kids, a groom attacks the wedding DJ after being forced onto the dancefloor, a bullied young man battles his inner demons, called Crushing Doubt and Self Loathio – which have a certain rolling nature that mirrors the circularity of most arguments but which don’t offer enough insight into how and why we fight. They seem included just to allow the actors to romp around the stage, farting in each other’s faces and hitting each other with foam sticks. And rather than revealing subtextual layers of characterisation or interrogating the process, a meta level seam of self-referential comments – about the ‘crap’ dialogue, the ‘puerile’ humour, and the need the work out a decent ending – serve only to highlight the show’s actual weaknesses.

I came away no wiser as to why humans argue, or even why these particular characters argue (they might be sick of the sight of each other – there are a number of references to how long they’ve all been working together – but more likely it’s because they’re all so irritating). What is clear is that this show is really not for me; I’m obviously a miserable stick-in-the-mud for finding a feast of slapstick punch-ups, complete with schoolyard insults and fart jokes, neither hilarious nor thought-provoking. Sorry.

Reviewed for Exeunt
Posted by Exeter Insider at 11:13