The Believers at Drum Theatre, Plymouth 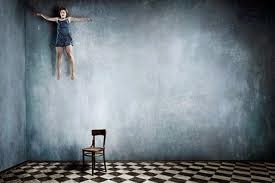 What if the one thing you were certain – absolutely, unreservedly certain – about, the belief on which the foundations of your entire life were built, suddenly turned out not to be true? How would you reconcile your past actions and decisions, your choices, in the new knowledge that they were all based on a lie? And how could you move forward now that the solidity of certainty has given way to an abyss beneath your feet?

This is the scenario explored in The Believers, Frantic Assembly’s latest collaboration with Bryony Lavery, which once again unites a company exquisitely skilled in movement and the visual representation of subtext with a writer of exceptional sensitivity to the nuances of human interaction. And the result is an astonishing piece of theatre that thrills and quickens the senses while plunging you deep into what it means to live and love and lose yourself completely to an idea.

In the midst of a terrible storm, Ollie and Maud offer refuge to their stricken neighbours, Joff, Marianne and their ‘difficult’ nine-year-old daughter Grace, whose home is under rising floodwater. While Grace goes to play upstairs with the hosts’ daughter Joyous, the adults – a quartet awkward and mismatched through vastly different outlooks – tuck into roast chicken and Ollie’s ‘famous peanut sauce’. As the white Rioja flows and becomes a joint or two, the adults loosen up, revealing their beliefs and their secrets… and then something terrible happens, and the framework of each couple’s worldview collapses.

From the start, Jon Bausor’s minimalist set design – geometric metal angles and raked levels, shot through with strips of fluorescent lighting – creates the potential for alternate realities, echoing the different planes of perception and interpretation explored in the narrative. A piece of the set – a metal construction that resembles at times the bare bones of a room, at others a bed frame – is in motion for a lot of the action, manipulated by the characters mid-scene, mid-sentence, to tip perspectives and alter the shape of interactions. As they rotate and glide it around the stage – the floor of which is highly shined, mirror-like – the characters step through it, into it, at times become part of it, and the pace of movement seems to quicken, the action speeding towards its inevitable end. On the ‘second’ floor, a space that the characters inhabit at various times is like a door to another realm, surrounded by strip lighting that, when illuminated, causes them to disappear completely, as if plucked from reality. Scenes played out on the upper sections of the set cause the characters to appear almost upside down, or suspended mid-air. Nothing here is as it seems. What can any of us really be sure of?

It is the secular and cynical Marianne (Walsh) and Joff (Colquhoun) who are the most easy to relate to. Ground down by what we infer to be the challenging behaviour of their child Grace (‘we’re always apologising for her’), they’re constantly swearing and undermining each other, but are united in their irritation at the overtly smug Ollie (Mylan) and Maud (Layden), so secure in their utter faith in God and his love for them, and their perfect daughter, Joyous (‘no doubt named after one of her orgasms,’ sneers Marianne). All performers are pitch-perfect, delicately drawing out the complexity of each character and using stillness as much as movement to eloquent effect. Walsh in particular impresses in a heart-wrenching moment in which Marianne stands alone with her pain – never have I heard a full auditorium so silent, so moved to immobility.

Scenes shift between each couple – in both the ‘now’ of the aftermath and the ‘then’ of the storm – interwoven with scenes in which all four struggle to find common ground, before separating out to betray intimacies. As the inebriation deepens, and confusion sets in, Ollie’s self-serving proclivities emerge; Joff reveals that he and Marianne have always been ‘repelled’ by Grace, frightened of her, and Maud raises the possibility of ‘evil’. Even though we never see Grace and Joyous, the children are a palpable presence, ever at the edge of our perception, themselves absorbing and interpreting the actions and emotions of their parents. It is through their ‘presence’ that we come to question to whom the title of ‘believers’ might be more suited – Ollie and Maud in their religious surety, or Marianne and Joff in their fear of the intrinsic ‘badness’ of their daughter?

With the floodwater rising all around them, sinister undercurrents ripple to the surface, before everyone is plunged into the maelstrom. Andy Purves’s masterly lighting design manipulates the darkness to thrilling effect, using gradual fades to pull us into the corners then explosions of wattage to utterly disorient, the gloom blooming on the retina before leaving you further adrift. Combined with the meticulous choreography – a perfect mix of stillness and motion – it causes characters to materialise in front of us, wraith-like, out of nowhere. And with Carolyn Downing’s sound design ratcheting up the tension degree by stealthy degree, we become as untethered as the characters as their disunity descends into chaos.

In this first production since the departure of Steven Hoggett, former Frantic regular Eddie Kay steps into the role of Associate Movement Director with assurance, ably assisting director Scott Graham to create a brilliantly dark thriller that leaves you gasping.

Reviewed for Exeunt
Posted by Exeter Insider at 11:16

Email ThisBlogThis!Share to TwitterShare to FacebookShare to Pinterest
Labels: Arts & Culture, Home, Out of Town