I Don't Know What You're Talking About at Bike Shed Theatre 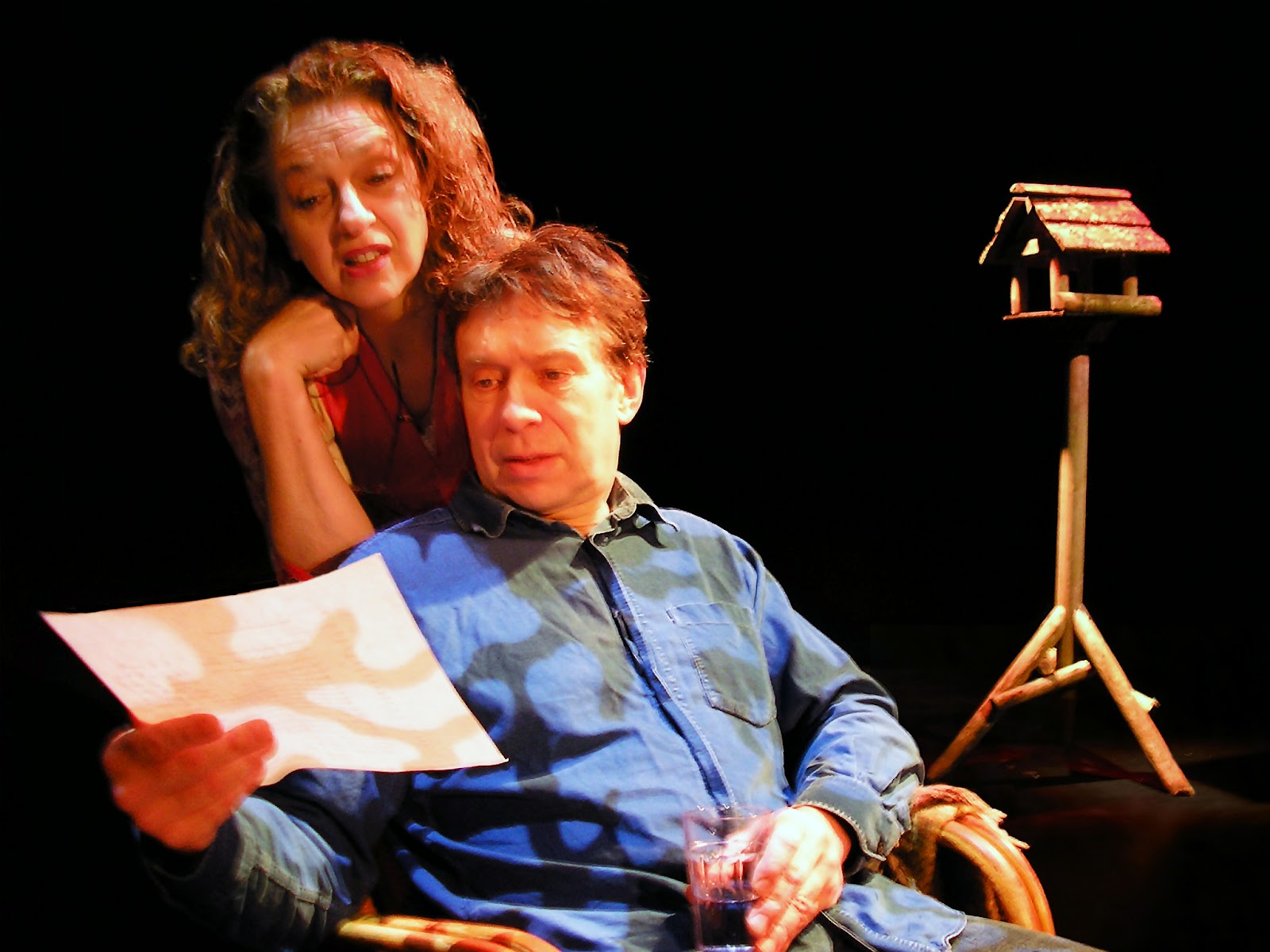 In a sunny garden, enveloped by birdsong, Bill and Gill talk about stories. They have a shared past – possibly as colleagues, or teacher and student, or perhaps more – that hovers at the edges of their interactions, hinting at something unspoken, unresolved, unrequited. At Bill’s request, Gill is visiting and has brought tales about the origins of language, about miscommunication and misunderstanding. As they pass the threads of myth and parable back and forth, collaborating and disagreeing, encouraging and correcting, the pattern of their own entwined narrative is revealed, and we, too, are pulled inside this subtly moving paean to the power of story.

They begin at the beginning, with flood myths from around the world, and as Gill takes tentative steps into the telling – at times deferring to Bill, occasionally challenging his interruptions – we glimpse the structure of their relationship in all its give and take, surge and retreat. While Gill balks at the ease with which Bill claims ownership of the most ancient stories, by amending details and altering characters, she also questions the intrinsic patriarchal slant – where are the tales with women at their centre, shaped by women’s experiences? But Bill, who is increasingly infirm, has a specific story he wants – needs – to tell: Nimrod and the Tower of Babel. In a way that reflects the power balance in their own relationship, Bill takes control of the narrative; when he is intermittently gripped by seizures, during which he disappears from the moment, as if dropping out of the present, Gill steps in to support him, and they create the story together.

From start to finish, this performance is elegantly structured and beautifully paced, with a script that revels in the power of the word to conjure vast landscapes and epic endeavour alongside the pulsing of the human heart. With segues into neurology – the search for ‘poetry in the prefrontal cortex’ – that juxtapose vibrant images of neurons in the brain and electricity whizzing across synapses, making connections and combinations like ideas fizzing between people crammed into the expanding city of Babel, the narrative is at once rational and scientific and brimming with passion. And it’s absolutely gripping, Bill steadily building the story, pulling it towards its conclusion, shaping it just as Nimrod’s followers placed brick upon brick in their attempt to reach the stars.

Stripped right back – and in that simplicity managing to pack philosophy and science, myth and magic, laughter and heartbreak into a riveting 80 minutes – the strength of this piece comes from the union of intelligent writing and the word-perfect power of the performances. It explores how the stories that appeal to us, that speak to the deepest parts of us, are the ones that reflect our situation, our needs and our desires, and affect the very structure of our brains.

Reviewed for Exeunt
Posted by Exeter Insider at 06:16 No comments: 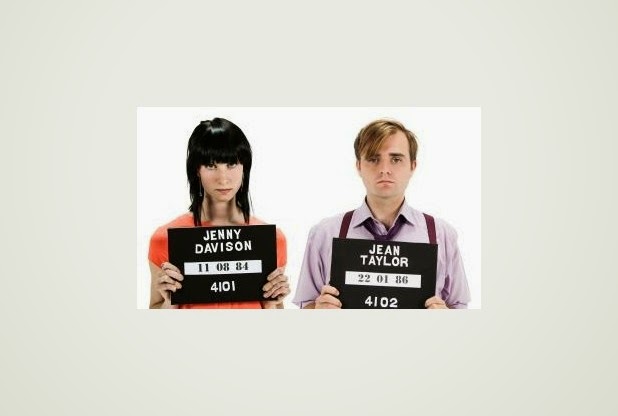 NB: This performance was at the Bike Shed Theatre on 10th March 2014. Sorry it's late going up...

At first take, Cornish company ‘Owdyado Theatre’s new show is a psychological drama with a wide streak of black comedy about a murder at glue company EvaBond. On the discovery of the bludgeoned body of managing director Graham White, the police pull in co-workers Jenny Davison and Jean Taylor for interview. With actors Charlotte Bister and Daniel Richards playing both the suspects and investigating detectives Wykowski and Harding, the action switches between interrogation rooms in the days after the murder.

As the interviews progress, and despite their protestations of work satisfaction and total commitment to the successful launch of EvaBond’s new product – U-Bind 2000, the glue that will stick anything to everything – it becomes clear that Jenny and Jean have much to be resentful of when it comes to Mr White. Meek and eager to please, Jenny is put-upon and overlooked, her amenable nature exploited by her boss and her colleagues; ambitious Jean, with his shiny suit and high-flying PR girlfriend, is out for a bonus and a promotion, things that Mr White dangles before them both. The corporate ethos demands ‘120%, 100% of the time’ because, as Mr White is fond of saying, ‘You never know where glue will take you.’ Working all hours in preparation for the launch, tensions are high and boundaries are being tested. Surely it was only a matter of time before the boss got his name plaque embedded in his skull…

Shifting between scenes in which the tanktop-wearing Harding bemoans the quality of police station tea while pushing Jenny to acknowledge her limited horizons and the stern, authoritative Wykowski forensically unpicking Jean’s thwarted ambitions, the narrative uncovers the despair at the heart of the corporate hamsterwheel; the joy-sapping grind of endless targets and quotas interspersed with team-building exercises and ‘themed Fridays’, all played out against the backdrop of videos demanding more productivity and more profit, and motivational posters calling for employees to ‘think the unthinkable’.

But this piece is not just a straight-forward whodunit; it’s a clever interrogation of performance and ritual, of compromise and self-deception, of the duality of personality necessitated by ‘work life’ and ‘home life’. Directed by Kneehigh collaborator Simon Harvey, there’s immense attention to detail, a slick script and fine performances, although the piece has a little way to go before it fulfils its potential (the makers refer to it as ‘still in development’) – and it’s impossible to discuss why without MASSIVE SPOILERS, so here goes…

Taking much (and fully acknowledged) inspiration from Jean Genet’s 1947 play The Maids (in which two domestic servants – sisters – role-play the murder of their aristocratic mistress in a series of increasingly sadomasochistic scenarios), Above Bored explores the notion of acting and acting out. At the end of Act One it becomes clear that Jenny and Jean are dramatising their boss-killing fantasy, each taking the role of detective in the aftermath of the ‘murder’ to allow the space for them to vent their frustrations, to ‘confess’; they are the embodiment of Mr White’s motivational doctrine – they are ‘thinking the unthinkable’. But the pace of their role-play and their focus on specifics – as in Genet’s play – result in a constant deferral of satisfaction, preventing them from reaching the climax; they are stuck in a ritualistic rut just as they are stuck in the world of glue.

But whereas in The Maids there is an intrinsic tension deriving from the characters’ class differences – enhanced by the fact that Madame appears, allowing us to fear that the sisters will act on their fantasies – the world of Above Bored lacks that deep sense of inequality; although the employees feel resentful of Mr White’s authority, everyone is essentially in the ‘middle’, has worked or is working their way up. That it is also a two-hander means that Mr White only ever appears in dialogue between Jenny and Jean. The result is that the piece lacks a certain tautness, although there is more space to explore the characters’ personal narratives – their dissatisfaction with their choices – which is largely well written and played. As Jenny and Jean’s role-play takes on flashes of sadomasochistic colour, we come to realise that meek and pliable Jenny has bigger reserves of determination than at first appears: the scenes in which ‘Wykowski’ gets rough with Jean allow us a glimpse, perhaps, of Jenny’s inner dominatrix, and play nicely on the notion of office frisson and the tension of proximity.

Once we know that Wykowski and Harding aren’t ‘real’ police – and it’s interesting to note that by using a police interrogation scenario to frame their fantasies, Jenny and Jean have ‘succeeded’, in that the presence of police is dependent on a corpse, even though their role-play never allows them to get there – and are simply extensions of the characters’ fantasy personas, there’s the space for real transgression to take place, the potential to really explore the darkest corners of theatricality and illusion. The first act is also in danger of playing a little too long with the pretence of being a detective investigation about murderous goings on at a glue company; there’s a tear in the veil – ‘we’ve done this bit,’ says Jenny, prompting ‘Harding’ to start his line again – towards the end, but the pace would benefit from dropping it in earlier, and then building in more leading up to the reveal. That said, Above Bored is definitely one to stick with.

Posted by Exeter Insider at 06:11 No comments: